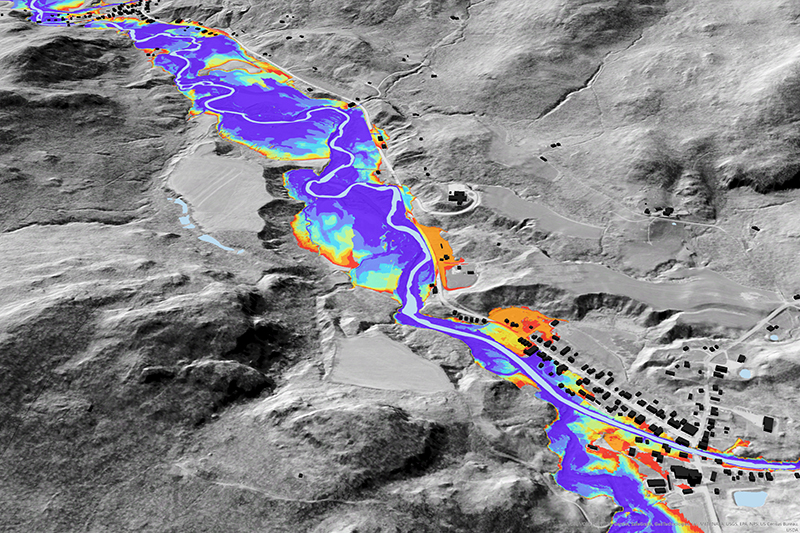 The new flooding layer as seen above with other QL2 lidar data at the Trout River between Montgomery and Montgomery Center in Franklin County, VT. (View Image at Full Size)

VCGI is pleased to announce the availability of a detailed flood inundation layer for the Vermont portion of the Lake Champlain Basin. The product is informed by Vermont’s statewide QL2, 0.7-meter resolution lidar collections performed between 2013 and 2017 and depicts the lateral extent of flooding at 8 modeled storm sizes of recurrence intervals ranging from 2 to 500 years for rivers that drain more than 2 square miles. 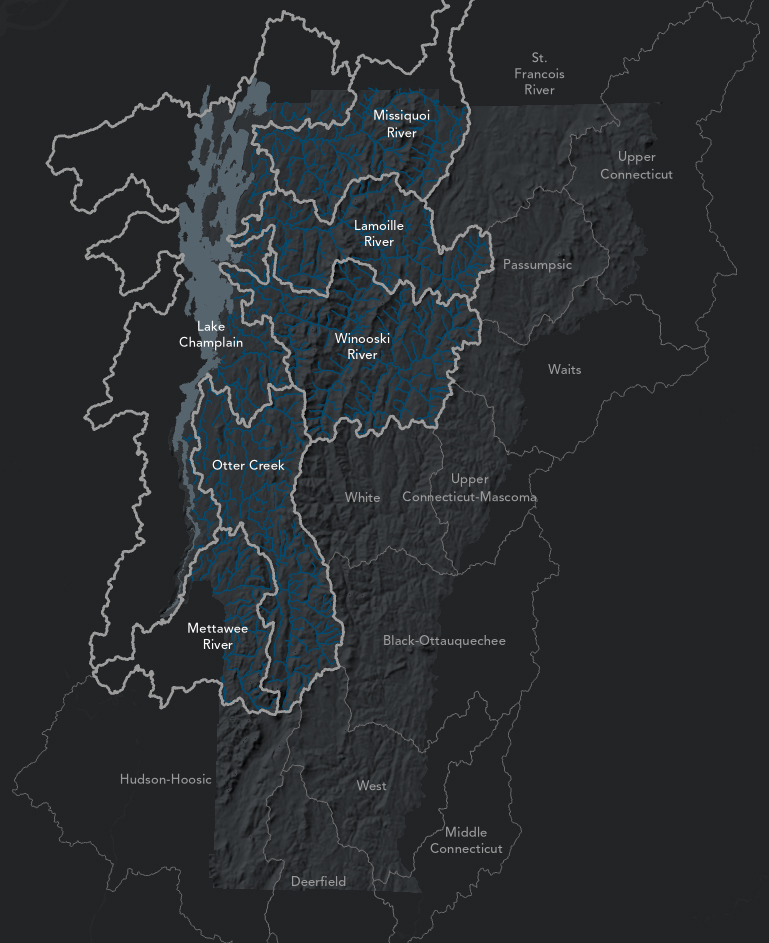 The flood data reflect the above modeled reaches within the Vermont portion of the Lake Champlain Basin watershed, as shown along with HUC8-level hydrological boundaries. Small-stream hydro-enforced digital elevation models (DEMs) for these areas were also created and are available at the VT Open Geodata Portal. 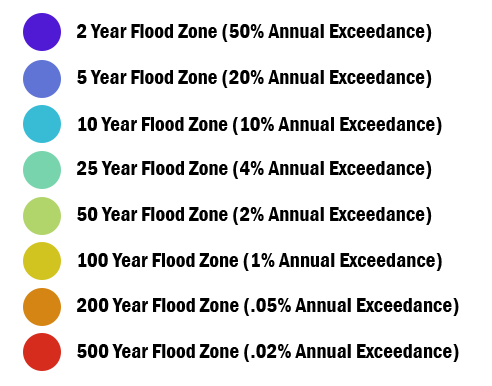 The flood layer was produced by researchers at the University of Vermont and is intended for planning and research use. Users can learn more about how the layer was created, its uses and caveats from the associated report:

The flood layer is not regulatory and is not a substitute for the FEMA’s National Flood Hazard Layer (NFHL) and associated Flood Insurance Rate Maps. For Vermont-specific information on official FEMA maps and flood-related work in municipalities, please visit floodready.vermont.gov

Still, the new flood layer is exemplary of what can be learned from high-quality lidar input data and this is particularly apparent when viewed alongside other flood resources such as existing DFIRMs: 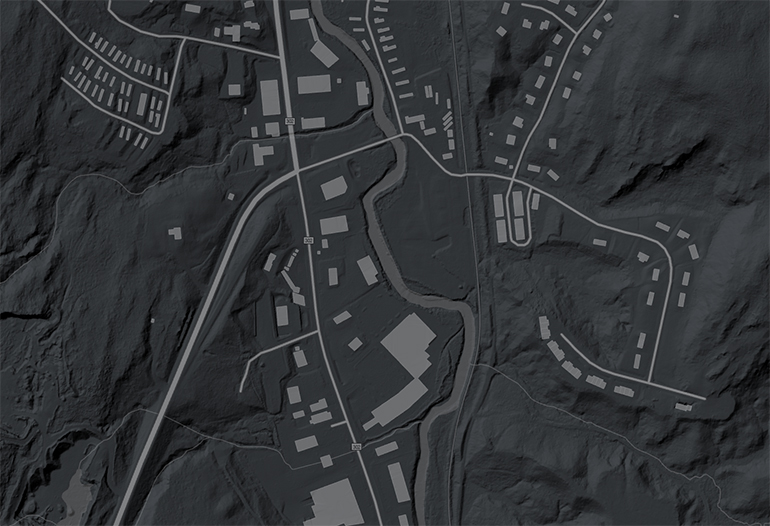 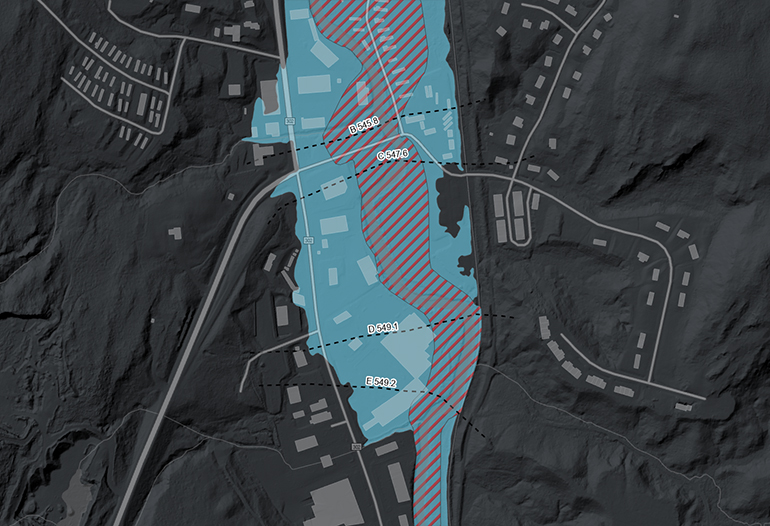 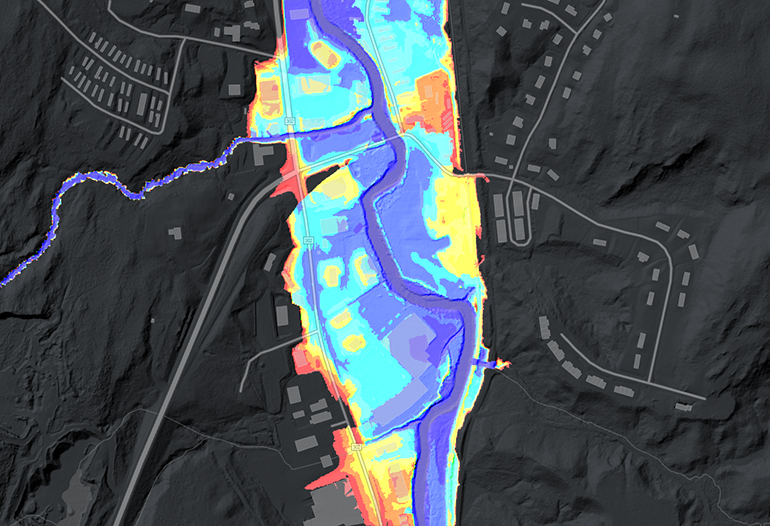 The image sequence above depicts Route 302 in Berlin, VT, first with the non-flood condition of the Stevens Branch, second with current effective DFIRM data showing the regulatory floodway in red hatch and Zone AE, or 1% annual chance flood hazard area in blue, and third the UVM-produced and lidar-informed flood layer.

Funding for the floodplain dataset came from many sources including the Water Investment and Watershed Management Divisions of the State of Vermont Department of Environmental Conservation, Lake Champlain Basin Program, the Vermont Water Resources and Lake Studies Center, Lake Champlain Sea Grant, Vermont Center for Geographic Information, GUND Institute for Environment, and The Nature Conservancy.

Items are available at the Vermont Open Geodata Portal either as downloads and/or streamable as web services at the following links:

Downloads are also available at the following links:

The data are also available to view within the web map below (view web map in a browser tab).

VCGI is your source for the State of Vermont's geospatial data, information, and activities.